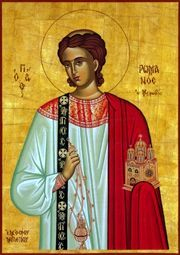 The hymnologists of the Orthodox Church are Christians of virtue and great faith, having been endowed with musical talent as well as the power of religious inspiration. Their creations have enriched our worship services and have helped turn our souls towards God. Perhaps the greatest of all hymnologists is St. Romanos the Melodist. Many other hymnologists had written ecclesiastical hymns, but none of them inspired the Christians as much as St. Romanos.

Romanos was a Syrian Christian who lived in the beginning of the 6th century. A convert to Orthodoxy from Judaism, he was ordained a deacon and served in the Church of Beirut. His talent was great. Unlike others, he wrote his hymns in simple language and produced a pleasant meter in the verse by the way he accented words. The hymns he composed appealed to the hearts of the people, and are still sung today. Romanos has been called "Sweet Singer" (Glykophonos), "Melodist" (Melodhos), and "Righteous Chanter" (Psaltis Dhikeosinis).

Romanos wrote hundreds of hymns celebrating the mystery of the Incarnation, the Crucifixion, the Resurrection, and the living of a Christian life. One of his most famous compositions is the hymn celebrating the Nativity of our Lord, "Today the Virgin gives birth to One who is above all living things..." (I Parthenos Simeron). St. Romanos is also said to have composed the Akathist Hymn, a kontakion which we still chant during the Heretismoi services during Great Lent.

Romanos died on October 1st in 510 AD. He was a productive genius and artist, writing and accenting thousands of kontakia. He has been called the patron saint of all who sing for the Church. Others say he is the leader in the world of religious hymnology. Surely, he has made a profound contribution to divine worship and deserves to be recognized by all who sing and by all who listen to the hymnology of our services.

The first Sunday on or after the Feast of St. Romanos (October 1st) has been designated by our Archdiocese as NATIONAL CHURCH MUSIC SUNDAY. Each year on this Sunday, we pause to honor the gifts and contributions of our church musicians — clergy, choir directors, psaltai, choir members, organists, and Church School music educators. We thank them for their devotion to our Church through their Ministry of Music.